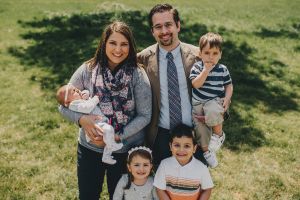 Ruben and Jenn are serving the Lord in León, Spain alongside David & Loida Robles and Gus & Melissa Pidal. Ruben graduated from The Master's Seminary with his M.Div. in 2011 and Th.M. in 2014. He and Jenn have been married since May 15, 2010, and the Lord has blessed them with four precious children.

Goals:
Strengthen and serve at the local church in Leon
Help to develop a seminary program on expository preaching to train men in Spain

Current Ministry:
Ruben serves at the Berea Bible Seminary, and serves at the Evangelical Church of León through preaching and discipling. Jenn enjoys her role as a wife and mother at home, and is involved with the women’s events as much as possible.